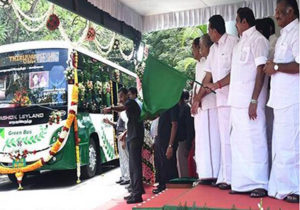 Tamil Nadu gets its first air-conditioned electric bus that was flagged off by Chief Minister Edappadi K. Palaniswami in the city yesterday.

The bus has automatic doors and GPS and will make two round trips each in the morning and evening. The vehicle will be operated on a ‘battery swap’ basis and can run a maximum of 40 km with a fully charged battery. On completion of a single round trip, the battery will be swapped. Aimed at reducing pollution levels, electric buses are being introduced on a pilot basis.

The 32-seater bus complies with the standards of the Automotive Research Association of India (ARAI) and is equipped with a Fire Detection and Suppression System (FDSS) and other facilities to monitor the driver’s functions and the battery’s performance, among other factors. The Metropolitan Transport Corporation (MTC), plans to operate the bus, manufactured by Ashok Leyland, on a trial basis at Deluxe rates, with a minimum fare of Rs 11 and a maximum fare of Rs 25.