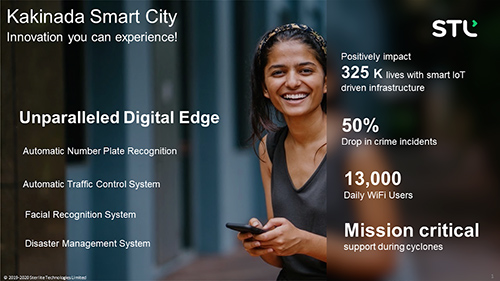 The city is powered by STL’s Command and Communication Centre (CCC). With over 1,600 elements of Smart City technologies integrated into it, this is one of India’s most advanced CCCs, and features many technology firsts such as horizontal Internet of Things (IoT) platform, Long Range (LoRa) based city-wide Wireless Sensor Network and Disaster Management System.

STL’s CCC has brought smart city applications for CCTV surveillance, Wi-Fi, automatic number-plate recognition and face detection to one single screen. This enables better governance, faster crime detection and resolution rates. With the completion of the Kakinada Smart City, STL has now delivered three Smart Cities – Gandhinagar, Jaipur and Kakinada. STL has been transforming data networks through core innovations across end-point applications for citizen networks, like Smart Cities, and with end-to-end design and deployment of networks for large enterprises such as the defence. If has also been innovating hyperscale solutions for Telcos and Cloud Companies to enable access to internet-based applications across 100 countries.