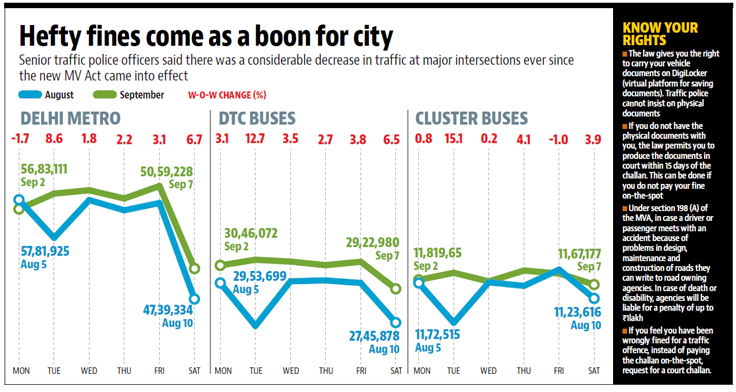 As a result of the implementation of the amended Motor Vehicles’ (MV) Act, the ridership of public buses and the footfall in each corridor of the Delhi Metro have gone up by around 4.8% and 3.3%, respectively, in the first few days of September. This trend is a shift in the commuting patterns that favour public transport over individual vehicles.

Though the agencies have not regularly recorded data with respect to the change in traffic volumes across roads, there has been a considerable decrease in traffic at major intersections. The ridership of public buses for six working days between September 1 and 10 stood at 25.37 million, compared to around 24.21 million for the corresponding period in August.

For Metro, the line utilisation – summation of passenger traffic in the eight operational Metro corridors of Delhi – stood at 34.19 million between September 1 and September 10, as compared to around 33.10 million for the corresponding period in August.